In New York City on December 13 – 15, together we will shape history and lift up our New American Dreams! Join us and NIIC 2015’s broad range of participants as we envision immigrant integration for our nation!

We’ll be making history together Dec 13-15, 2015 at NIIC 2015. Watch this video and find out why you should join the country’s largest immigration-related conference, and the largest National Immigrant Integration Conference yet!

NIIC 2015 in New York City: Globally renowned as a gateway for immigrants and home to the biggest immigrant community in the United States, NIIC 2015 will be held in a transformative moment in the national conversation on Comprehensive Immigration Reform, President Obama’s legacy, including Administrative Relief, and the lead up to the 2016 elections. NIIC 2015 will be situated in the cultural and financial capital of the country: what happens in NYC has a major impact on policy, business trends and culture.

NIIC 2015 will build on 7 years of partnership and innovation in shaping immigrant inclusion and integration in America. Our sustaining vision is that of a collaborative table where policy, business, nonprofit, labor, academic, faith, community and philanthropic sectors build solutions together.

Founded over 25 years ago, the New York Immigration Coalition (NYIC), the local Co-Host for NIIC 2015, is the leading advocate for New York’s immigrant communities on the local, state and national level.  NYIC brings together 165 organizations and entities that work with immigrants and refugees across the city and the state; together, our multi-ethnic and multi-sector constituencies pursue a common agenda and represent what is best about New York—diversity, energy, and the drive for positive change.

NYIC is a proud member of the National Partnership for New Americans, the national Co-Host and anchor for NIIC 2015. NYIC is committed to bringing voices from across New York to NIIC 2015 and share our experiences from the last quarter century of advancing immigrant integration. NIIC 2015 will also advance NYIC’s work with regional and national partners. 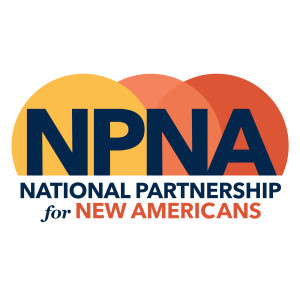 The National Partnership for New Americans (NPNA) is a national multiethnic, multiracial partnership. We represent the collective power and resources of the country’s 34 largest regional immigrant rights organizations in 29 states. Our members provide large-scale services—from DACA application processing to voter registration to ACA outreach—for their communities, and they combine service delivery with sophisticated organizing tactics to advance local and state policy.

Our aim is to achieve a vibrant, just, and welcoming democracy for all. We believe America’s success is rooted in our ongoing commitment to welcoming and integrating newcomers into the fabric of our nation, and to upholding equality and opportunity as fundamental American values. Immigrants are the soul of our organization, and immigrant comm
unities inspire, implement, and champion our work.

partners Make the Road New York, which builds the power of Latino communities to achieve dignity and justice, as well as the Massachusetts Immigrant and Refugee Advocacy Coalition, the largest organization in New England promoting the rights and integration of immigrants and refugees.

Our visual history: A look at the geographical reach of the National Immigrant Integration Conference over the last eight years. 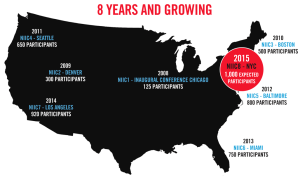 NIIC 2015 will be held at the New York Marriott at Brooklyn Bridge located in the heart of downtown Brooklyn, New York, just a few blocks from the historic Brooklyn Bridge that overlooks New York Harbor, the Statue of Liberty and Ellis Island. The NIIC 2015 discounted room rate is $199/night and complete room booking information and reservations will be open soon. Check back here for more details!

A signature property in Brooklyn, New York Marriott at Brooklyn Bridge is steps away from the Brooklyn Heights Historical District, the vibrant DUMBO arts scene, a beautiful and expanded Brooklyn Bridge Park and esplanade, just minutes away from the 9/11 Memorial, the South Street Seaport, the Lower East Side and the countless other adventures to be found in the city that never sleeps.